Skip to content
Home › The state of diversity in tech

The state of diversity in tech

Here’s a quick rundown of the state of diversity in tech. It’s been 55 years, 6 months, and 19 days since the President Lyndon Johnson signed the Civil Rights Act of 1964, which banned employers (and everyone else) from discriminating based on race, color, religion, sex, or national origin.

So, are workplaces more equal in 2020 than they were back then?

Well, judging by employment statistics, the gap is closing, but it definitely hasn’t disappeared. Here’s a closer look at the national picture:

And unemployment among workers who identify as Hispanic or Latino also fell to a record low of 4.2%.

Since the 1970s, unemployment among minority groups has remained consistently higher than the unemployment rate among white workers (with the occasional exception of Asian workers), as the graph below shows. 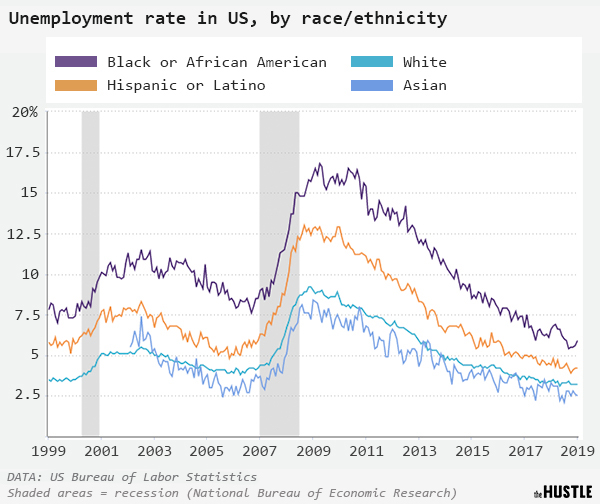 And minority workers also lag behind their white peers in earnings thanks to discriminatory policies that concentrated them in the-lowest paying industries.

And the gap in Silicon Valley is baaad

Diversity in the VC community, for example, is way worse than average. Data compiled from 1.5k VC investors in 2018, for example, showed that:

The data also illustrates that most VCs share remarkably similar backgrounds, which means that people who don’t share those backgrounds often find it harder to break into Silicon Valley’s insular world.

But even in the tech industry, employers are making progress: In the past few years, diversity and inclusion reports have become common, and a number of minority-focused VC funds have formed to support minority entrepreneurs and businesses.