Skip to content
Home › Travel and Leisure › I scream, you scream, we all scream for a 4-day workweek?

I scream, you scream, we all scream for a 4-day workweek?

Think you deserve some time off? A growing number of companies agree. 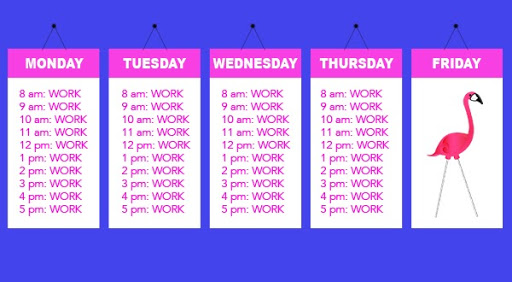 In the early 1930s, the US considered adopting a universal 30-hour work week. Congress killed the bill — and with it, your dreams of downing margaritas every Friday at noon.

With workers burnt out from… *gestures at everything*… companies like Buffer are trying it out.

Some definitions say a 4-day week = 10-hour days. But there’s another version — 32 hours over 4 days, with full-time benefits.

The logic of 32? Better-rested and happier employees are so much more productive that they don’t need a 5th day.

But does the 4-day week work? The data is mixed:

Here’s one thing to remember

You might assume that more productivity translates to more time off or better pay. We’ve done the first part: Worker productivity went up 5% between 1987 and 2015.

But the pro-4-day crowd points out that the second step never happened — workers’ pay went up only 2%, and their hours never went down.