Home › When targets and metrics are bad for business

When targets and metrics are bad for business

How the never-ending quest to quantify worker productivity can go terribly, terribly wrong.

There’s an old fable from Soviet Russia that goes something like this:

A nail factory manager (we’ll call him “Big Boss”) wants his workers to produce more, more, more! So, he decides to measure their output with a metric.

First, Big Boss settles on the number of nails produced. A few days later, he is dismayed to find that his workers have produced thousands of tiny nails — more in volume, but a fraction of the usual size.

He hastily switches the metric to pounds of nails per day. When he visits the factory a second time, he can’t believe his eyes: One enormous nail dangles from the rafters.

This tale isn’t so different from the modern workplace. Our value as employees is often boiled down to the quantifiable, whether it’s our output of nails, the number of products we sell, or the number of pageviews we get on our articles.

But there’s a problem with that: When a metric becomes a target — that is, when it becomes the primary focus of a job —  it ceases to be effective.

To demonstrate why, we’ll turn things over to our pal, Otis:

Otis is just about the most interesting dude we know. He’s worked nearly every job there is — and along the way, he’s had some harrowing encounters with the dark side of metrics.

Take, for instance, his first gig as a grocery checkout clerk.

Like other cashiers, Otis was given an efficiency quota of 800 items bagged per hour. One day, as the apples, and Pop Tarts, and Greek yogurt containers flew down the conveyor, he found himself falling behind.

Otis hit his company-ordained metric, but in the process hurt the business.

Plagued by repetitive stress injuries from scanning cabbages all day, Otis set his sights on a career in sales.

Here, he encountered a different type of measurement. The bulk of his compensation hinged on a sliding scale of performance metrics: If he sold less than $50k worth of vacuum cleaners per month, he’d net a 3% commission; $50-99k, and the commission would increase to 5%; $100k+, and he’d get 7%.

On the last day of the month, Otis noticed a curious trend: Everyone on the sales team was on the phone trying to reel in last-minute deals, push into the $100k+ zone, and increase their commission rate. But in order to land the sales, they were gratuitously giving out discounts usually only reserved for special circumstances.

The targets, Otis found, encouraged his colleagues to sell at all costs — even if it resulted in diminished margins for the company at large.

Eventually, Otis grew wary of guzzling sugar water and listening to his sales manager talk about Bob Seger. It was time to move on to a brighter pasture: Online advertising.

In this world, Click Through Rate (CTR, or the % of people who click on an ad when they see it) was the prevailing metric. Unfortunately, Otis’s clients often made this metric a target by demanding that their ads achieved an unrealistically lofty CTR. They didn’t care for supplemental metrics, like bounce rate or conversion rate.

One night, Otis got a late request: Ferrari, the luxury car maker, wanted him to make a Facebook ad with a 15% CTR — 16x the industry average of 0.90%.

Toiling in a midnight delirium, Otis had no choice but to optimize the ad to get the maximum number of possible clicks. He found a flashy image of a sports car, wrote some scammy copy, and targeted 13- to 17-year-old male Facebook users.

Ferrari hit its metric, but the clicks were entirely meaningless — and Otis, an ad man with moral fortitude, once again began to question his place in the professional world. 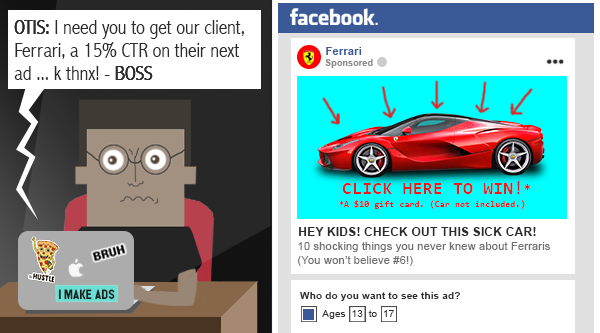 He came into the industry with lofty ambitions: He’d tackle hard-hitting stories! He’d rustle the feathers of humanity! He’d write with vigor and passion, and grasp for the truth — a contemporary Upton Sinclair!

His first assignment: “10 Aardvarks That Look Like Liza Minelli.”

See, Otis had a quota to hit — 2 million pageviews per month — and if he routinely fell short, he risked being usurped by the next fresh-face out of Columbia School of Journalism. To get the views, he had to rely on the tried on true: Sensational headlines, memes, and, cats.

Luckily, there was a fall-back option for smart kids who didn’t know what else to do in life: Computer programming.

With code, most tech companies had adopted a “less is more” approach: It wasn’t about the length or girth of your Python; it was how you used it. Unfortunately, Otis’s new boss saw things a bit differently.

The only programmer at a non-technical business, Otis was given a quota of 300 lines of code per week. He was an impressive coder— he’d had lots of time to learn the craft on the side while writing listicles about “hot Disney princes” — but he struggled to stretch his minimal, elegant work to meet the ordained metric.

He found himself taking on jobs that required the largest volume of code rather than the those most critical to the company’s infrastructure. For jobs requiring less code, he beefed up line count by writing meaningless “filler.”

The prioritization of blind output over foundational work proved to be a lose-lose situation: Wasted efficiency for the company, and wasted time for Otis.

After a few years of pounding the CTRL key, Otis had the finger muscles of a Greek God. It was only natural that he tried his hand as a surgeon.

Before long, he learned that even saving lives was tainted by metrics: Under pressure to maintain low mortality rates for the hospital, Otis found himself turning away patients with dire complications. Across the street, in the ER parking lot, patients sat for hours in ambulances so emergency rooms could keep their wait time quotas down.

The surgeon was disheartened. Was there a profession where inflexible metrics wouldn’t have a perverse effect on his work? Cynically, he went down the list:

It seemed Otis was out of luck.

He realized that when his performance was measured with a specific metric, he optimized everything to hit it, regardless of the consequences that arose. As a visiting professor at the London School of Economics told him, improper targets could:

And so, Otis decided to start his own company — a company where metrics would serve their true purpose: To motivate and align.

Efficiency, Otis finally realized, isn’t just output; it is the value of what is produced.

Lightning speed at a checkout stand is less impressive if it leads to inventory loss. Two million pageviews are worthless if the article fails to deliver a promise of quality to readers. Writing 300 lines of code means nothing if it isn’t impactful.

Today, Otis never institutes a target without deeply thinking about what it is he wants to measure, and why it matters. He frequently reassesses metrics. He allows for change, flexibility, innovation, and failure. He relies on human discretion.

And most importantly, he understands that no measurement — regardless of managerial wrangling — is immune to Goodhart’s Law.