Skip to content
Home › Jeff Bezos is building a massive, 10,000-year clock inside a Texas mountain

Jeff Bezos is building a massive, 10,000-year clock inside a Texas mountain

After more than half a decade of construction, Bezos and company finally begin installing their massive, $42m clock inside a West Texas mountain. 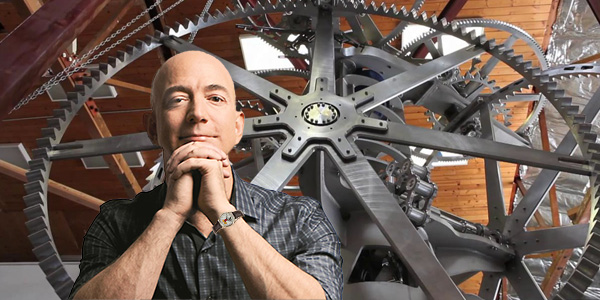 After $42m and more than half a decade of construction, Amazon’s Jeff Bezos and a team of engineers have finally begun installing a gargantuan clock deep inside a West Texas mountain.

The clock is all mechanical, stands 500 feet tall and is supposed to run for 10,000 years. That’s right: one thousand decades.

A timepiece nearly 30 years in the making

Bezos got involved with the construction of the clock in 2011 — but the idea was actually conceived back in 1989 by Danny Hillis, an American inventor and entrepreneur.

In the mid-’90s, Hillis formed the Long Now Foundation, a nonprofit aimed at disrupting today’s “fast/cheaper” culture, and began work on an actual functioning version of the proposed clock shortly after.

And it gets doper: in a video posted to Twitter, Bezos explains that the clock is powered by “day/night thermal cycles” and “synchronized at solar noon,” with the help of JPL having calculated the sun’s position in the sky at noon every day for the next 10k years.

The clock reportedly is designed to tick once per year, and also has a century hand that tocks every 100 years, and a cuckoo that comes out on the millennium.

Here’s a question: why?

For Bezos, the clock symbolizes the power of long-term thinking. His ultimate dream is that the clock will change the way humans look at time.

“Over the lifetime of this clock, the US won’t exist… Whole civilizations will rise and fall. New systems of government will be invented… in the year 4000, you’ll see this clock and wonder, ‘Why on Earth did they build this?’” Bezos gushed.

Or, you know, he’s just a bored billionaire on a hollowed-out mountain layered path to global super-villainy.