Chuck E. Cheese has a very odd way of protecting its intellectual property

After a Chuck E. Cheese location closed in a small Illinois town a few weeks back, a strange video made the rounds on the internet. In the foreground, all appears normal, as employees wheel old machines and decorations out to a moving truck. But in the background, a horror story unfolds: 2 women hover over […] 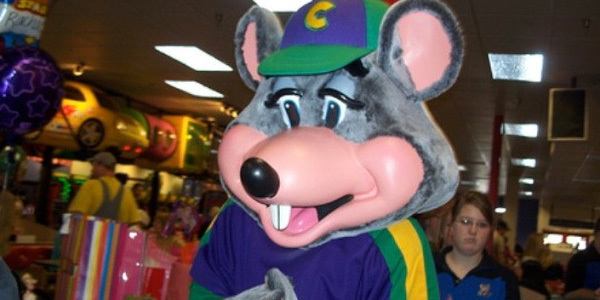 After a Chuck E. Cheese location closed in a small Illinois town a few weeks back, a strange video made the rounds on the internet.

In the foreground, all appears normal, as employees wheel old machines and decorations out to a moving truck. But in the background, a horror story unfolds: 2 women hover over an old Chuck E. Cheese mascot head, taking turns beating the sh*t out of it with a sledgehammer.

And, as it turns out, that’s just part of the family entertainment chain’s policy…

Because the mascot is the company

See, that mascot, Chuck “Entertainment” Cheese, has been around since the company first launched back in 1977.

His goofy-looking face has gone through numerous rebrandings over the years: he started out as a “cigar-smoking rat from New Jersey” and gradually morphed into a more kid-friendly critter.

But one thing’s never changed: the Chuck E. Cheese mascot is an integral part of the chain’s brand.

And he’s a valuable piece of intellectual property

As Atlas Obscura chronicles, Chuck E. Cheese maintains a strict policy of demolishing its mascot’s head when a location closes down for several reasons:

First, to protect the kids: as one company executive says, seeing a dismembered Chuck head in the garbage would be “very traumatic for a child.”

But the most pressing reason is likely legal. Chuck E. Cheese needs to protect its trademark and intellectual property — and sometimes that requires crushing your mascot’s head, so others don’t find it in the trash and sell it on eBay.