Liquid Death is one of the funniest DTC brands out there. Its CEO tells us the people and brands that inspired the canned water startup. 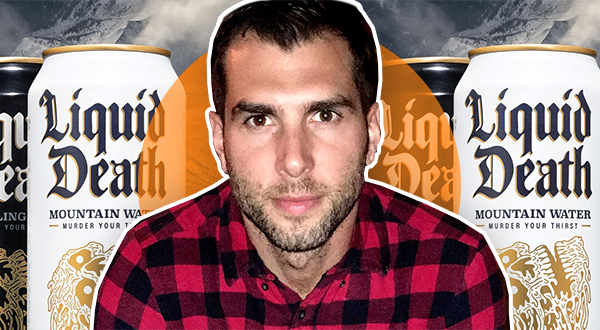 Liquid Death — a canned water startup with $34m in funding — is breathing new life into the sleepy water space with a hilarious heavy metal-influenced brand and irreverent marketing (motto = “Murder your thirst”).

We caught up with company’s co-founder and CEO Mike Cessario to find out the inspirations behind Liquid Death:

What are business leaders that have inspired you?

In addition to Richard Branson [who was able to build exciting brands in otherwise boring industries, like airlines], I also like:

Are there any corporate brands that you look up to?

I would compare the brand that Liquid Death is building to more of a famous music artist than a traditional corporation.

Think of Travis Scott. He has a really strong brand that people identify with and he sells them so many things: music, apparel [e.g., custom Nikes] and other things [e.g., McDonald’s promotion].

Travis Scott is the mold of the type of brand that Liquid Death is building.

What are the best commercials or marketing campaigns you’ve seen?

More recently, I like what Purple mattress protector has done with this weird sasquatch.

With its heavy metal influence, could Liquid Death eventually become a music brand?

Well, we released a vinyl record called Greatest Hates [a collection of metal songs created around negative reviews and comments].The artist that worked on that album had a great time with it.

We’ve had a number of legit musicians from well-known bands that want to do the next Greatest Hates album.

I think these artists are attracted to our brand. Honestly, when you can create music without much pressure (e.g., Greatest Hates is a marketing play), you have more fun. And you’ll make better stuff.

(Editor’s Note: On the My First Million podcast, Cessario talks about the non-water products that the Liquid Death brand could sell including vinyl records and — hypothetically — Heavy Metal yoga studios)

You’ve previously mentioned how some edgy brands (e.g., Snapple) lose their magic after being acquired. Is there an example of a brand that has done well post-acquisition?

I think Unilever has done a decent job after acquiring Dollar Shave Club. They kept Mike [who is also an investor in Liquid Death] and I think they let the brand keep its personality.

In the future, I think more acquiring companies will realize the importance of keeping the magic that made a brand good in the first place. Opposed to just thinking it can apply traditional big corporate moves and expect results.

While working for an agency, you handled the Netflix relationship. What did you learn from them?

One lesson I learned from Netflix is their approach of creating cool marketing that generates its own media.

As an example, the tie in they did with Levi’s and Stranger Things. The jeans weren’t particularly special, but the way Netflix set up the marketing on it led to lots of press coverage.

What’s the best book you read in the last 12 months?

The Sellout by Paul Beatty, a really smart and sarcastic novel full of interesting racial commentary.

Find out what you’re good at and focus on that, instead of being distracted by things you’re not so great at.

Who is the most interesting person you know?

Up there pretty high is Joe Manganiello, an actor (True Blood, Magic Mike) who is married to Sofia Vergara.

He’s like this ridiculously jacked good-looking actor from Pittsburgh who also happens to be a massive Dungeons & Dragons (D&D) nerd and heavy-metal fan.

Variety recently wrote an article about how Joe has these D&D game nights with Vince Vaughn, Tom Morello (Rage Against the Machine), Paul “The Big Show” Wight (WWE) and D.B. Weiss (Game of Thrones co-creator).

I am tired of decision overload like trying to pick which show to watch, what song to listen to or what food to order.

There are way too many decisions on all of these apps.

There’s this Japanese restaurant my wife and I go to. It’s basically an omakase (Japanese translation = “chef’s choice”) and we just trust them to bring the best food…and they always do.

CHECK THIS OUT: Liquid Death’s first viral Youtube video (Mike is the one being “waterboarded”)