Tossing the ol’ pigskin is a big ol’ business for top universities: ticket sales, media rights, branding, video game licensing, and other revenue streams add up to hundreds of millions of dollars per year at certain programs. Given this, how much would players be worth if they were permitted to receive compensation like NFL athletes? […] Tossing the ol’ pigskin is a big ol’ business for top universities: ticket sales, media rights, branding, video game licensing, and other revenue streams add up to hundreds of millions of dollars per year at certain programs.

Given this, how much would players be worth if they were permitted to receive compensation like NFL athletes?

Using data from the Department of Education, and assuming college players made 47% of all revenue (similar to the NFL’s collective bargaining agreement), Business Insider calculated the fair market value of football players at top universities.

The average FBS football player is worth $163k per year to his university — but at certain schools, that figure is way higher. 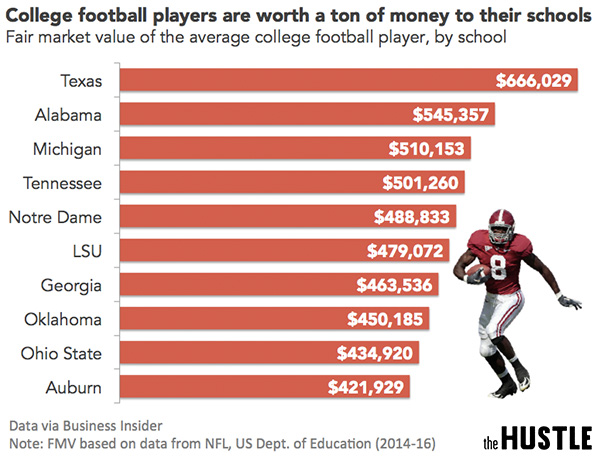 At the University of Texas, the average player would make $666k per year — more than the average CFO at a mid-sized company. At Alabama, Michigan, and Tennessee, players would also make $500k+.

Of course, today’s players aren’t paid — and any income they generate from their athletics status is highly scrutinized. But this data adds more fodder to the ‘Should college athletes get paid?’ debate.