How a janitor at Frito-Lay invented Flamin’ Hot Cheetos

Richard Montañez went from cleaning toilets to being one of the most respected execs in the food industry.
BY Zachary Crockett
November 29, 2017

On an early morning in the late 1980s, a group of the highest-powered executives at Frito-Lay — the CEO, CMO, and a platoon of VPs — gathered in a California conference room to hear what Richard Montañez had to say.

Montañez didn’t share their pedigree. He wasn’t an executive. He had no fancy degree. He had a 4th-grade-level education, and couldn’t read or write.

Montañez was a janitor. But he was a janitor with an idea — an idea that would make the company billions of dollars and become one of history’s most celebrated and iconic snack foods: Flamin’ Hot Cheetos.

But first, he had to convince the world to hear him out.

Montañez grew up in the 1960s in Guasti, California, a tiny unincorporated farming town 40 miles east of Los Angeles.

Under the sweltering Cucamonga Valley sun, his family — mother, father, grandfather, and 11 children — scraped together a meager living picking grapes, and slept together in a one-room cinderblock abode at the labor camp.

As a first-generation Mexican immigrant at an all-white school, Montañez had access to few resources and struggled to understand his teachers. “I remember my mom getting me ready for school and I was crying,” he later told Lowrider magazine. “I couldn’t speak English.”

One day in class, the teacher went around the room asking each kid to name his or her dream job: Doctor… astronaut… veterinarian. When she called on Montañez, he froze.

“I realized I didn’t have a dream,” he says. “There was no dream where I came from.” Montañez soon stopped getting on the school bus and began boarding the work truck with his father and grandfather.

After dropping out of school, he worked the fields in 110°F heat and took on odd jobs slaughtering chickens at a poultry factory, washing cars, and picking weeds. With a 4th-grade-level education and few economic opportunities, Montañez saw no path out of poverty.

Then, in 1976, a neighbor told him about a job opening that would change his life.

“There’s no such thing as ‘just a janitor’”

Down the road, in Rancho Cucamonga, the Frito-Lay plant was looking for a janitor.

At $4 per hour ($18 in 2019 dollars), the job paid many multiples of what Montañez made in the fields. It represented a better life — insurance, benefits, social mobility.

Unable to read or write, the 18-year-old recruited his wife to help fill out an application. He journeyed down a dusty road, met with the hiring manager, and got the job.

When he broke the news to his family, his grandfather imparted a piece of advice that would always stick with him: “Make sure that floor shines,” the man told his grandson. “And let them know that a Montañez mopped it.”

Montañez decided he was going to be the “best janitor Frito-Lay had ever seen” — and he quickly made his presence known.

“Every time someone walked into a room, it would smell fresh,” he says. “I realized there’s no such thing as ‘just a janitor’ when you believe you’re going to be the best.” The Frito-Lay plant in Bakersfield, California (via CLUI)

Montañez also developed the philosophy that “it’s not about who you know — it’s about who knows you.”

In between shifts, he set out to make himself seen, learning as much as he could about the company’s products, spending time in the warehouse, and watching the machines churn out crunchy snacks in the lonely midnight hours.

And eventually, his insatiable curiosity would pay off.

“I saw no products catering to Latinos”

By the mid-1980s, Frito-Lay had fallen on tough times. As a way to boost morale, then-CEO Roger Enrico recorded a video message and disseminated it to the company’s 300k employees.

In the video, Enrico encouraged every worker at the company to “act like an owner.” Most employees brushed it off as a management cliché; Montañez took it to heart.

After nearly a decade mopping floors, Montañez gathered the courage to ask one of the Frito-Lay salesmen if he could tag along and learn more about the process.

They went to a convenience store in a Latino neighborhood — and while the salesman restocked inventory, Montañez made a fortuitous observation: “I saw our products on the shelves and they were all plain: Lay’s, Fritos, Ruffles,” he recalls. “And right next to these chips happened to be a shelf of Mexican spices.”

In that moment, he realized that Frito-Lay had “nothing spicy or hot.”

A few weeks later, Montañez stopped at a local vendor to get some elote, a Mexican “street corn” doused in chili powder, salt, cotija, lime juice, and crema fresca. Cob in hand, a “revelation” struck: What if I put chili on a Cheeto? Introduced to the world in 1948, Cheetos — crunchy corn-based nuggets coated in cheese-flavored powder — were a flagship product of Frito-Lay. And while they were popular among California’s growing base of Latino consumers, the company had yet to consider re-tailoring the product’s taste profile.

“Nobody had given any thought to the Latino market,” recalls Montañez. “But everywhere I looked, I saw it ready to explode.”

So, Montañez heeded the CEO’s words and “acted like an owner.”

Working late one night at the production facility, he scooped up some Cheetos that hadn’t yet been dusted in cheese. He took them home and, with the help of his wife, covered them in his own concoction of chili powder and other “secret” spices.

When he handed them out to family members and friends, the snacks were met with universal enthusiasm. He just needed a bigger audience…

So he called the CEO

“I was naive,” Montañez later said. “I didn’t know you weren’t supposed to call the CEO… I didn’t know the rules.”

Finding Roger Enrico’s phone number was easy enough: It was listed in a company directory. He rang the line, and was put through to the chief’s executive assistant.

“What division are you with?”

“No, I work at the Rancho Cucamonga plant.”

“Oh, so you’re the VP of operations?”

“No, I work inside the plant.”

The assistant paused for what seemed like an eternity. “One moment.” Then, a voice on the other line: “Hello, this is Roger.”

Montañez told the CEO he’d heeded the call to action. He’d studied the company’s products, identified a demand in the market, and even crafted his own rudimentary snacks in his kitchen.

Enrico loved the ingenuity: He told the janitor he’d be at the plant in 2 weeks and asked him to prepare a presentation.

Moments after Montañez hung up the phone, the plant manager stormed up to him. “He said, ‘Who do you think you are? Who let the janitor call the CEO?’” recalls Montañez. “Then he said, ‘YOU’RE doing this presentation!’”

The birth of the Hot Cheeto

Montañez was 26 years old. In his words, he couldn’t read or write very well and had no knowledge about how to formulate a business proposal.

But he wasn’t about to give up.

Accompanied by his wife, he went to the library, found a book on marketing strategies, and copied the first 5 paragraphs word for word onto transparencies. At home, he filled 100 plastic baggies with his homemade treats, sealed them with a clothing iron, and manually drew a logo and design on each package.

On the day of the presentation, he bought a $3 tie — black with blue and red stripes — and had his neighbor knot it for him. As he gathered the bags, his wife stopped him near the door: “Don’t forget who you are.” 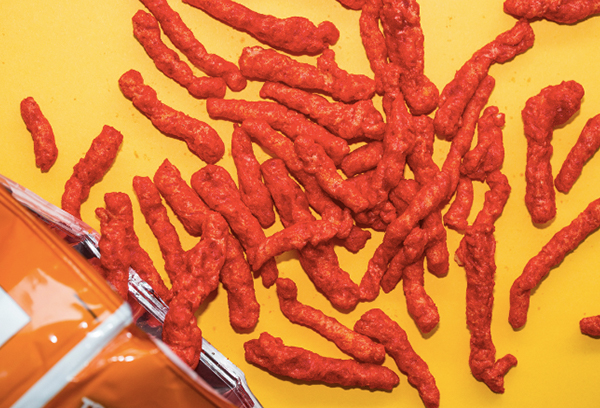 Montañez stepped into the boardroom. “Here I was,” he says, “a janitor presenting to some of the most highly qualified executives in America.”

At one point during the presentation, an executive in the room interjected: “How much market share do you think you can get?”

“It hit me that I had no idea what he was talking about, or what I was doing,” Montañez recalled. “I was shaking, and I damn near wanted to pass out…[but] I opened my arms and I said, ‘This much market share!’ I didn’t even know how ridiculous that looked.”

The room went silent as the CEO stood up and smiled. “Ladies and gentlemen, do you realize we have an opportunity to go after this much market share?” he said, stretching out his arms.

He turned to Montañez. “Put that mop away, you’re coming with us.”

If it performed well, the company would move forward with the product; if it didn’t, they’d scratch it — and Montañez would likely return to janitorial duties. This was his one shot, and some folks didn’t want things to work out for him.

“It seemed there was a group of [executives] who wanted it to fail,” he later told the podcast, The Passionate Few. “They thought I got lucky. They were paid big bucks to come up with these ideas… they didn’t want some janitor to do it.” So Montañez assembled a small team of family members and friends, went to the test markets, and bought every bag of Hot Cheetos he could find.

In 1992, Flamin’ Hot Cheetos were greenlit for a national release. And in short order, the snack became one of the most successful product launches in Frito-Lay history.

From janitor to VP

Today, Flamin’ Hot Cheetos are one of Frito-Lay’s hottest-selling commodities — a multi-billion-dollar snack celebrated by everyone from Katy Perry to middle-schoolers on meal vouchers. There’s even a rap song about them.

And Montañez is no longer sweeping floors: Over a 35-year career, the former janitor rose through the corporate ranks and is now the vice president of multicultural sales for PepsiCo America (the holding company of Frito-Lay).

Before Montañez joined the executive team, Frito-Lay had only 3 Cheeto products; since then, the company has launched more than 20, each worth $300m+.

Recognized by Newsweek and Fortune as one of the most influential Hispanic leaders in America, Montañez is a gifted speaker who often tours the country giving keynotes. And soon, his story will hit the silver screen: Fox Searchlight Pictures is currently working on a biopic about his life, appropriately titled “Flamin’ Hot.”

He still lives in Rancho Cucamonga, where he gives back to his community through a nonprofit he launched and teaches MBA classes at a nearby college.

Recently, a student asked him how he was teaching without a Ph.D.