Skip to content
Home › The Story of How Venmo Was Started

The Story of How Venmo Was Started

The story behind every millennial's favorite app for paying back their friends is one of uncertainty, friendship, and perseverance. “Hey Hoobastank, venmo me that song you just played.”

Yup, that was almost a thing.

And I, for one, am thankful it never left the idea phase. Because the idea that came next was so darn good.

Welcome to the reality of starting a business, where an idea for monetizing live music can morph into a mobile payments platform so popular it becomes a verb.

Welcome to the story of Venmo.

Andrew Kortina and Iqram Magdon-Ismail first met as randomly paired freshman roommates at the University of Pennsylvania in 2001.

Here they are laughing hysterically. 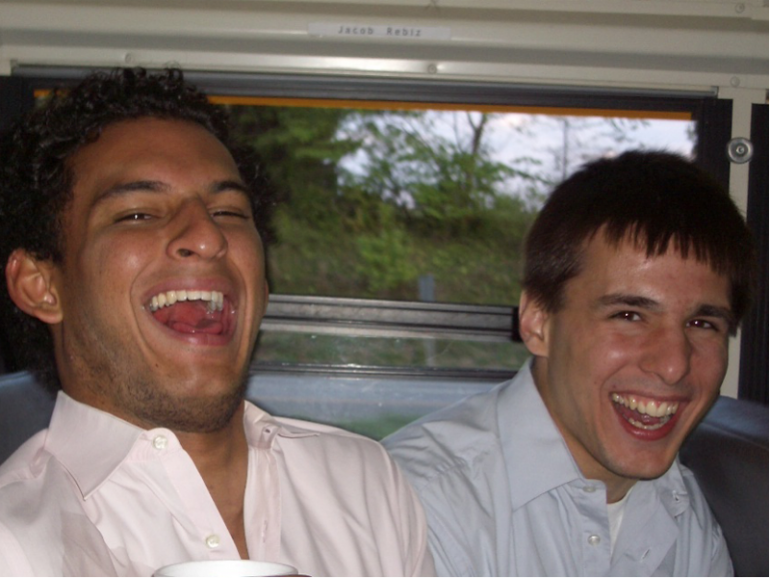 Iqram majored in computer science while Andrew was a double major in philosophy and creative writing. He started out studying computer science, too, before making the switch.

And his explanation for doing so is actually pretty awesome:

“I started in computer science, but found that much of the learning I was doing happened while I was doing homework exercises, and I was getting no additional value out of the University. I couldn’t justify tuition costs when I was only learning by spending time doing programming exercises, and I developed a hypothesis that I would maximize the value of tuition costs by studying the least practical subjects possible, the things I would not get to do after graduation, like reading and discussing great books with a group of incredibly smart students and professors.”

During their senior year, Andrew and Iqram built their first real project together, a college classifieds site called My Campus Post.

“It was our first taste of all night coding sessions to get a product to market,” said Andrew. Now, if you’re like me, you probably assumed the founders of an app as successful as Venmo were turning down job offers left and right as graduation approached.

“I clearly remember the day when my mom was in town for graduation and she asked, ‘What are you doing after you graduate?’ I was sitting on the floor of my dorm room, and I remember being very scared about the question, thinking, ‘I have no idea what I want to do with my life,’ but also feeling OK about the short term, eventually answering, ‘I don’t have to move out of my dorm until 2 weeks after graduation. I’ll figure something out.’”

The summer after graduation

What he and Iqram “figured out” was that subletting an apartment in West Philly was super cheap. So, they got one and spent the summer building websites for pretty much anyone.

During this time, they were also working on an online music selling platform called Philafunk, which was a lot like iTunes meets MySpace.

They realized two things during their first summer in the real world:

So, they decided to go gain some much-needed business knowledge.

The path to Venmo

Andrew and Iqram spent the next few years working at companies such as iminlikewithyou.com (which later became OMGPOP, the gaming company behind Draw Something), Ticketleap, and Bit.ly.

Then, in early 2009, armed with infinitely more knowledge and experience than last time around, the two friends decided to start spending their weekends hacking different ideas together. Their first idea came when a friend enlisted their help in opening her own yogurt shop. In the process of getting her up and running, they realized how horrible traditional point of sales software was.

So, they created software that would turn any laptop into a cash register. All it required was a USB magtek swiper, which costs less than $50.

However, they decided distribution would be a challenge, and since they didn’t envision themselves using the product on a daily basis, the excitement just wasn’t there. Andrew and Iqram’s next idea came to them at a local jazz show.

They thought it’d be cool if you were able to download the live show by sending a text message to the band right then and there, and have an mp3 show up in your email.

This was getting much closer to the Venmo concept they’d ultimately arrive at. It even bore the Venmo name.

Here’s Andrew:
“Lots of people ask about the origin of the name… We were exploring the Latin root vendere ‘sell’ and mo for mobile, but purely as a means to get to a name that (1) was short, 5-6 letters, (2) could be a verb, (3) didn’t have a unintuitive spelling, and (4) was cheap. Venmo was available on GoDaddy and met the important criteria, so we grabbed it.”

While Andrew makes the process for choosing the name sound simple, it’s arguably the most important decision they’ve ever made.

“Just venmo me” is a phrase overheard on every college campus in the country and has been integral to their growth and popularity.

What other companies are verbs? Google, Uber, Photoshop… It’s a pretty short list. One weekend, while working in NYC on this music idea, Iqram realized he’d left his wallet in Philly. Andrew ended up covering him the whole weekend, and Iqram wrote a check to pay him back.

“Why are we still doing this?” they thought. “We do everything else with our phones. We should definitely be using PayPal to pay each other back. But we don’t, and none of our friends do.”

So they decided to solve the problem.

The first prototype worked over SMS and was incredibly simple. To send Iqram $20, all Andrew had to do was text “iqram 20” to the number they’d set up (which was a hacked Google Voice account) and Iqram would see “kortina paid you $20.” They quickly decided they needed to include a note with each payment so they could keep track of what each one was for. So, the input looked like this: “iqram 20 for chinese food.” On Iqram’s end, he’d receive a message saying, “kortina paid you $20 for chinese food.”

Sound familiar (minus the emojis)?

“Pretty soon, our SMS inbox was full of Venmo messages, and this started to look like a news feed of all the restaurants, bars, and shows we were going to, as well as emergent behavior like ‘$3 to pick me up a cup of coffee on your way in.’ The stories contained rich information about how and where we were spending our time (and whom with, as we got a few more friends on the beta).”

They decided that people should be able to share this stuff, so they added the #p option, which would make the payment show up in friends’ feeds on venmo.com.

From prototype to launch

Andrew and Iqram started meeting with investors shortly after the prototype was finished.

Here’s an excerpt from their executive summary:

Venmo enables anyone with a mobile device to send and receive payments via text message, creating a dialogue between buyers and sellers.

The shift to mobile payments requires a service that captures the subtle gestures involved in everyday cash exchanges. Venmo transactions are personal, with SMS notes that make payments feel like conversations. Venmo’s medium for maintaining these social nuances along with the ability to make payments, allows Venmo to take the stress out of exchanging money. The ubiquity of cellphones plus Venmo’s magic will create an impenetrable network effect, making Venmo the preferred way to pay for everything.

Surprisingly (especially in hindsight), they didn’t have much luck raising money. But in December of 2009, a friend of theirs and his father became Venmo’s first investors.

The rest, as they say, is history…