Meet the Girls Making a Living From Cosplay

Making money by doing what you love is THE dream, but not many get the chance to live it. Meet the girls who’ve turned their passion for anime culture and video gaming into a full-on career, complete with major perks.
BY Zara Stone
October 6, 2015 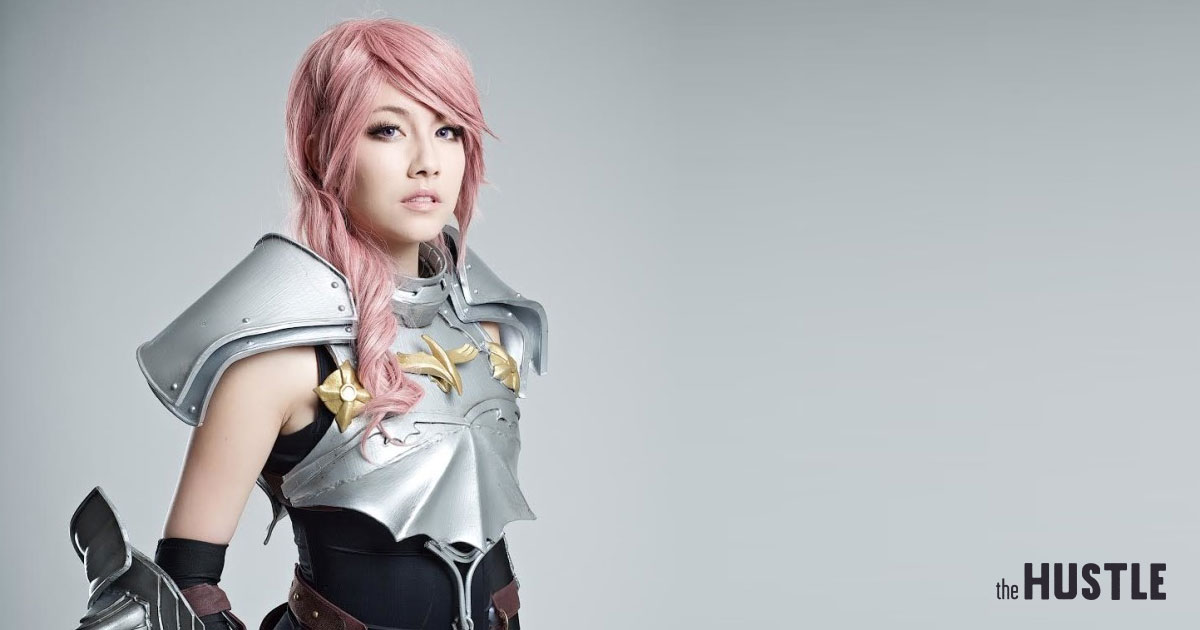 ust so you know, Lindsay Elyse’s breasts are 100% real.

Her cleavage might look gravity defying, but she wants you to be clear they’re all hers. “People love boobs. I love boobs. Boobs are nice!” she says. “But I am not just a giant boob.” Lindsay is one of the few full time professional cosplayers in the world. A career that she’s had for over a decade.

“A few years ago, comic conventions and cosplay blew up, and being a professional cosplayer became a thing,” she said. “It’s my only source of income.”

And Lindsay knows how to work it. Through designing and wearing gorgeously elaborate outfits – and showcasing them in stylish photo shoots – she has created a legion of fans. Which is why she gets questioned about her breasts so regularly; a testament to her popularity and a sad comment about the state of gamers today. She’s going to be in Paris mid October. There she’ll climb the Eiffel Tower, eat macaroons on Montmartre and take a selfie with the Mona Lisa. For free. These trips won’t cost her a penny. In fact, she’ll probably make money from her travels.

This is because Amie – known as MissHabit to her 56,700 Instagram followers and 305,646 facebook fans (as of September 29th 2015) is a part time professional cosplayer. She regularly dresses up as characters from Final Fantasy and Metal Gear for geek conventions. Amie’s spent the last six years turning her hobby into a source of income – which also helps fund her way through college. Yup, she’s a third year journalism student at the University of Arizona in Phoenix.

Here are some of her favorite outfits:

“She’s half Al Bhed and I’m half Chinese so it’s kinda like the same thing, I am Yuna!” 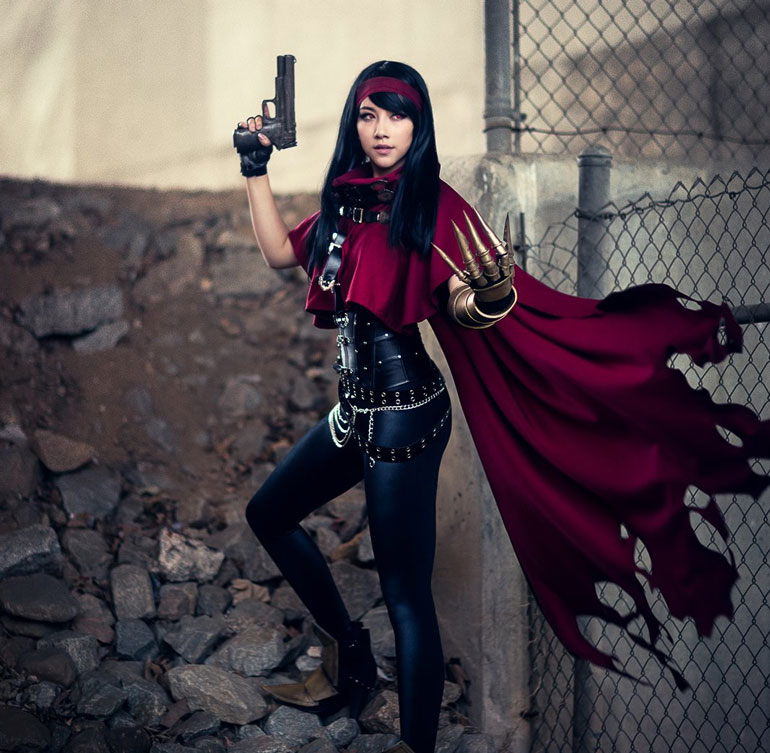 She looks badass and scarily accurate, but how did she go from gaming girl to queen of the cosplay world?

Amie’s love of cosplaying happened accidentally. She’d been a long time fan of videogames, but had never thought of dressing up till her friend asked her to join their group costumes for Los Angeles’s Anime Expo. The theme was Code Geass, and Amie went as C.C. the witch, complete with thick black eyeliner and long green hair. She wore an outfit bought from eBay.

The convention was fun, and Amie loved how people responded to her costume. But she wasn’t a fan of the one-size fits all costumes, and decided to start working on custom creations.

She started making her own costumes, teaching herself how to sew and build prop guns. She worked on a budget, using Christmas wrapping paper to sketch out her designs and cut out patterns, and she often uses PVC pipes and craft foam pieces to create weapons and gun props.

And, extraordinarily, this geeky pastime turned into a steady cash flow. “It happened accidentally,” she told The Hustle, “one of those strange twists of fate that you never expect will happen to you.”

People started noticing her at conventions. Her attention to detail, her energy, and her enthusiasm for all that was geeky. It was natural. It wasn’t faked. It didn’t take long for Amie to get approached.

A stranger handed her their card as she walked through the hall. Would she like to promote their booth? This seemed crazy to her; someone would give her money to go to events she loved? How could she say no?

To start with, the pay wasn’t great – “like a day rate, a low day rate” she said, but the requests started piling up.

But why not use models? “It’s more authentic than hired help,” Amie said, “Cosplayers love what they do.”

And people dedicate time for things they love. There’s the sketching, the planning, the buying of materials, the hours with the glue gun and spray paint. It’s hard work. At a stretch Amie could create one in two days, if it’s just sewing (like her Eva Metal Gear Solid costume) but anything with armor – which she prefers – takes anywhere from a week to two months. Amie doesn’t view cosplay as a full time career path. “I want to be known for more than this,” she said. “I don’t want to overdo it.” Her dream job is working in gaming PR, and helping companies figure out how to reach more people. For now, cosplay is her golden ticket, a passion that lets her travel the world, attending conventions and playing dress up for cash. Some companies want her to dress in costume, others request that she wears their t-shirts.

Why are brands spending $1000’s on cosplayers?

What’s the benefit for the brands that hire her? In September 2015 at the inaugural TwitchCon in San Francisco, Lynn worked on DeepSilver’s booth, talking to attendees and dressed in a black tee and jeans. Only her thick green hair and diamante cat headband identified her as THE Amie Lynn, Cosplayer extraordinaire.

But even minus her Final Fantasy get up, Amie can draw a crowd. She posted an eight-second video telling her Facebook fans she was there; so far it has 2129 views, and 249 likes. And many booth visitors requested selfies and pictures with her – that’s native advertising at work.

And just her being there is good for DeepSilver (who have not responded to a request for comment). Amie’s work at their booth (12-4pm, Friday and Saturday) led to numerous media spots, all which referenced DeepSilver and discussed their new games. That’s a clear win for the brand.

Companies she has worked with include MadCatz (which took her to Tokyo) and DeepSilver (took her to San Franciso).

Currently Lindsays’s hair is so pale that it looks silver under the neon lights of TwitchCon, the San Francisco based convention for Twitch streamers. This makes her eyes pop, giving her an anime like appearance, big eyes, light hair, pale face. And this is intentional; cosplaying has been Lindsay’s full-time gig for the last decade and she knows how to work a room.

Lindsay is candid about how she makes her career choice work. It’s about grafting, and having a heavy social media presence. She runs a busy Facebook, Twitter and instagram page, and has held a Reddit AMA that received 796 comments. Let’s break down her income streams Most cosplayers are shy about revealing their exact numbers, so we sourced some from industry experts. Cosplay Photographer Don McCaskill said that a low day rate is $75 to $300 for a cosplayer. But for the “top cosplayers” he told The Hustle that anywhere from $50,000 to $100,000 is possible, though this applies to about eight people. Additional modeling jobs can pull in $10,000 – $20,000.

And a lot of income comes from merchandise sales. McCaskill estimates that “top tier” cosplayers might make around $70-125,000 a year. Breaking this down, if a cosplayer attends 26 conventions a year and sells 100 prints (a low number) per weekend for $20, that’s $52,000 a year. Minus costs (makeup, equipment, photography shoots) that sounds pretty sweet. And this is North America. The Asian market is much larger and some of its stars – like Alodia Gosiengfiao (5 million plus facebook fans) might easily pull in a high six-figure income.

Lindsay’s doing pretty well for herself, and her fame has led to some big collaborations with brands. Her most recent is one with ZQGames, where she played Celestia. Lindsay’s costs are mostly for costumes. Prices vary, depending on complexity. Her favorite costume, Game of Thrones Cersei Lannister cost $200 (and didn’t sell many prints). For this she used upholstery fabric at $30 a yard. “ I feel like I embody her very well: I don’t have to smile and I can just scowl at everyone and pretend I don’t care.”

“It’s hard to put a lot of money into something and get nothing back, but that’s sort of just the chance you take!” On a typical day Lindsay wakes up between nine and twelve. She downs a cup of coffee, 40% coffee, 60% creamer, and starts plowing through her emails. And then she gets to work on her next costume, something that takes up most of her time. If she’s feeling hungry she snacks on Doritos (her favorite) and Guinness is what she unwinds with. Her average work week is 60+ hours.

This is split into shipping prints, social media and working on new cosplay outfits. She recently hired three people to help her with shipping; people to pack, label and mail out her stuff to fans.

Social media is everything for her

Lindsay is prolific in updating her profiles and she gets a great response from her fans.

And to keep her content stream busy she needs to work hard, making new costumes to style and photograph.

After a decade of cosplaying, Lindsay’s wardrobe rivals that of Sex and the City’s Carrie. Ridiculous and unattainable. But not everyone of her outfits has made it. She’s a keen upcycling, re-using costume parts in her new designs. Her Ariel cosplay uses her Margaery Tyrell skirt.

Lindsay’s passion is stamped on her body in the form of tattoos. A small lightsaber on her finger, a Tron logo on her wrist, a Kingdom Hearts crown and XIII above her elbow a horde symbol her foot, and lyrics from Bring Me the Horizons on her abs. This girl knows how to commit. So how do you become a full-time cosplayer?

Lindsay stresses that her cosplay career stems from her true love of geekdom, originating with her childhood of playing Life Force on the NES.

This led to experiences on consoles and PC gaming, and a lifelong passion for Warcraft and Kingdom Hearts. After she started making her own costumes for events, she realized how in demand hers kills were; a girl who is passionate about games and like to dress up as characters is a serious marketing tool.

Passion, authenticity and hotness. Winning combo, right? She’s adamant that she only work with companies where she likes the games. “I want to be able to geek out with fans!” she said, “Not to be like ummmm I don’t play any Bethesda games.”

Networking is key, Lindsay says, it’s about connecting to other cosplayers and big companies: being really active with updates. And connecting with her fans. At TwitchCon she took lots of selfies with attendees, and posted them to her Twitter page. She was an early adopter of Twitch, realizing how streaming could help build her brand. She now has 77,820 followers on Twitch with over a million likes. Lindsay is open to different ways of monetizing her brand, and is flexible with companies. She says that entrepreneurs need to have a thick skin. “Just don’t care” is her advice. She says you need to just keep going – remember, the internet is a cruel and malicious place for a girl in a bikini top and elf ears.

The future for full-time cosplayers

Lindsay and Amie both recognize that they can’t cosplay forever, and see themselves moving into a career on the gaming world; a place they already have a strong foothold. “I know I have to grow up eventually and can’t run around in costume forever,” says Lindsay.. but as long as people keep clicking on her photos she has a long run still ahead.

Cover image credit: Adam Patrick Murray
Sign up here for our daily news email to get all the non-political news you never knew you needed. All it takes is 5 minutes and BOOM, you're smarter.