Surprise: apps are still dead in the water

There was a time, long ago, when a wantrepreneur could dream up a new app and get a million first-week downloads. That time, my friends, is no more.

There was a time, long ago, when a wantrepreneur could dream up a new app and get a million first-week downloads. That time, my friends, is no more.

Media analytics firm comScore recently released its annual Mobile Apps Report and, while Americans are spending more time than ever before on mobile apps, they’re also not downloading new ones.

A majority (51%) of all smartphone users report downloading a grand total of zero new apps per month. 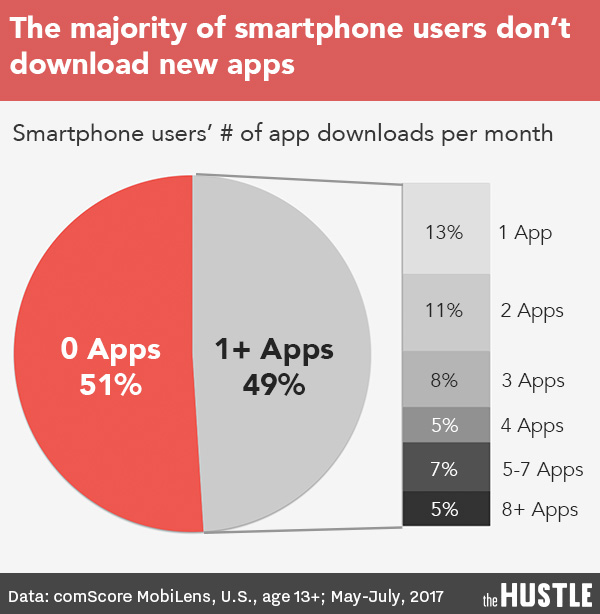 New apps have been struggling to find success for several years now, as the usual ilk command most of mobile users’ attention: Facebook and Google alone account for 8 of the 10 most-used apps.

We’ve reached a “saturation point” for apps, where it’s almost impossible for the new kids on the block to break into the game.

So, may want to rethink that “Uber, but for migrating narwhals” idea you were about to invest in.

Influencers are forming their own lobbying group

The good, the bad, and the ugly of your corporate swag

Treasure or toss? Readers weigh in on the highs and lows of promotional products. ...
Read More

The startup that wants to democratize hiring

If you like the concept of organic farming, you’ll love what these robots can do. ...
Read More

Koji wants to amplify memes by remixing them, in the same way that TikTok squeezes more juice out of audio and video mashups. ...
Read More

Alexa is the next target of our quarantine angst

We’re all starting to lose it a little bit. ...
Read More

Shaan and Sam are joined by Greg Isenberg to discuss the multi-million dollar companies being created from the unbundling of Reddit. ...
Read More