This week’s edition is with Payal Kadakia, founder and exec chairman of ClassPass, a fitness subscription service valued at more than $500m Note: Sh*t, I’m F*cked is a series by The Hustle where we ask entrepreneurs about a moment when they felt on the brink of failure. This week’s edition is with Payal Kadakia, founder and exec chairman of ClassPass, a fitness subscription service valued at more than $500m. Subscribe to The Hustle to get next week’s straight to your inbox.

Payal Kadakia has spent her whole life “checking off boxes.”

She grew up in New Jersey, the daughter of two chemists who immigrated from India, and devoted her early years to cheerleading and dancing. At MIT, she was always the person “doing crazy stuff.” When she wasn’t studying economics and operations research, she was planning dance shows, starting a club, or taking the lead on some ambitious, zany project.

After school, she landed high-paying gigs at Bain & Company and Warner Music Group. Then, in 2009, she decided to strike off on her own and start her own dance company, Sa Dance Company. 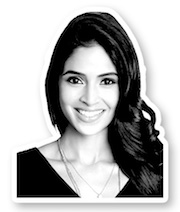 “My dad was pretty unhappy,” she says. “He wanted me to go the traditional route, go to business school… He’s the sweetest person in the world, and we never really got into any arguments. But, a week before my first big show, he called and said, ‘You need to stop this dance stuff, and go back to school!’”

Payal was in her mid-20s, taking professional risks — and she often dealt with cultural pressures. “At 21, my mom would always say, ‘Stay away from boys!’” she recalls. “ and then, from 22 forward, it was ‘When are you getting married?!’”

But Payal found success in dancing: Sa was soon performing sold-out shows and gracing the front pages of the New York Times’ Arts section. Not long into the venture, her father reversed his stance and began recommending graduate programs in the arts.

One afternoon in 2010, while researching ballet classes, Payal got frustrated with how terrible the existing systems for finding and booking classes online were. So, she set out to create her own platform.

The first iteration, Classtivity — sort of an “OpenTable for class schedules” — wasn’t a big hit. “We had this beautiful website with all this aggregated data,” she says, “but nobody was booking classes.” “The idea was that these studios would get new business, but nobody was signing up,” she says. Users just wanted to keep going back to the classes they liked most and were creating fake emails to hack the site’s attendance limitations.

By the Summer of 2012, Payal had finally started to figure out some of the kinks: she was accepted into TechStars (a prestigious tech accelerator in NYC), and eventually, through talking to hundreds of studio owners and class leaders throughout the city, began honing in on a business model that worked…

And then, she was attacked.

A week before her demo day pitch, Payal was sitting in a Starbucks working on a presentation. Out of nowhere, a man ran in, sprayed mace in her face, and tried to steal her computer and phone.

“I wasn’t in a great place,” she says. “I was dealing with the psychological trauma, and just thinking, ‘I don’t know if I can do this.’”

Demo day came and went — but to make matters worse, nobody wanted to invest. “My co-founder and I went to SF to raise money,” she recalls. “We were doing 3 meetings a day. People always tell you when VCs are interested, they follow up. But there was just silence after every single one.”

SH*T, I’M F*CKED
sign up today and follow the rest of the series
… AND NOW BACK TO IT

Classtivity was eventually rebranded as ClassPass, and after tweaking the business model toward a gym-like membership that allows users to attend an array of classes, the company has gone on to raise $173m and see great success. Payal’s personal net worth is now estimated to be at least $50m.

As many tech founders will tell you though, sometimes the biggest hardships come after you’ve “made it” — that unenviable period of time where everyone has written you off as a success story, impregnable to emotionally challenging situations.

One of Payal’s toughest decisions has been “stepping down” as CEO of the company she founded and handing off the reins to one of her investors, Fritz Lanman, this past Spring.

“I wanted to make sure women knew they could be powerful, regardless of their title.”

“From an internal perspective, it was a terrific decision,” she tells us. “But externally, it was tough. The one thing in my mind was I wanted to make sure women knew they could be powerful, regardless of their title.”

In her journey as an entrepreneur, Payal has become something of a figurehead for aspiring female founders. As a woman and a minority in an industry that is overwhelmingly white and male, she’s overcome the odds — and while swapping roles with Lanman was the right decision (today, she’s executive chairman of ClassPass), grappling with what other people might think has been an overwhelming source of concern her for at times. “For a long time, it was hard to turn off what other people think. It’s easy to put a lot of stock in what people say about you, or what they think. But those external pressures made [stepping down] really difficult,” she told us. “Having to convince people that I’m not going anywhere — that I’m still a part of this company — and that being in a more creative role is actually the best thing for me.”

So, at the risk of encouraging schadenfreude, even the world’s most successful people have moments where they find themselves saying: “Sh*t, I’m f*cked.”