Snap’s market value fell $1.3B after a single tweet by Kylie Jenner

Yet another reminder of just how dependent Snap is on influencers. On Wednesday afternoon, at 4:50pm ET, Kylie Jenner posed a question to her 24.5m twitter followers: “sooo does anyone else not open Snapchat anymore? Or is it just me… ugh this is so sad.”

Overnight, the tweet was shared nearly 300k times — and when the markets opened Thursday, Snap Inc. stock tumbled by as much as 7.2%, or $1.3B in market value. 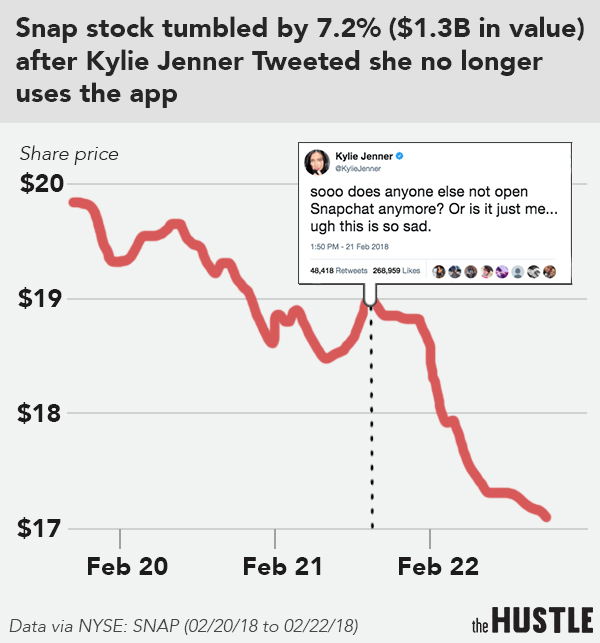 While analysts can’t conclusively determine whether the tweet was solely responsible for Snap’s decline, it serves as a reminder of just how dependent Snap is on influencers.

As recently as 2016, Jenner was Snapchat’s most viewed user “by a longshot” — and her declaration didn’t go unnoticed by Wall Street: Many comments on Jenner’s post echoed discontent with Snap’s redesign earlier this week, and the company’s “abandonment” of its core audience.

A follow-up tweet by Jenner 11 minutes later (“still love you tho snap … my first love”) didn’t seem to do much in way of recouping Snap’s losses.