You will have to accept being called a hipster if you use a flip phone. But do you care if you're more successful? *Disclaimer: you will have to accept being called a hipster on occasion.

“I need a new phone,” I say, drinking a scotch with Patrick, a petroleum engineer in Houston.

“A new phone?” he asks. “Just downgrade. I have this. Works great, and the battery lasts for a whole week.”

He holds up an old silver flip phone. It doesn’t have internet. ‘How can he live like this?’ I wonder. But then I think about how he owns his own home, and finishes work by 4 p.m. every single day. He’s 24-years old.

Could I be missing out? Picture this: you enter a bar with a big smile on your face, happy to speak to someone new. You see a hot girl at the bar and waltz over; everyone else is glued to their screens — but not you. The girl, Adrianna, is impressed by your confidence, and you start talking.

Eventually there’s that beautiful awkward silence, the tension rising, and the whole bar falls away. It’s just you, her, two smiles, and a spark… until she looks down at her phone.

Imagine a world where you navigate cities better than anyone else because you aren’t reliant on Google Maps (or Mapquest, if you live in 2006).

When you need to look something up, you don’t ask Siri. You sit down and research the topic, truly understanding it, instead of having a momentary orgasm of facts that disappear as fast as they arrive.

“Instead of stalking your ex while sitting on the porcelain throne, you have an honest-to-God epiphany about life.”

Instead of stalking your ex while sitting on the porcelain throne, you have an honest-to-God epiphany about life.

I snap out of my smartphone-less reverie and take another sip.

“You really listen when people talk to you.” I tell Patrick.

“You know why that is – I’m not looking at my cell phone every five seconds.”

Despite his arrogance, Patrick has a point.

The concept of a digital detox is popular in the hipster community, but unlike the fake horn-rimmed glasses, this actually makes sense.

For the first time in history, we’ve been able to connect the entire world, and you know what we’ve found out? There are a lot of stupid, ignorant people out there.

Don’t get me wrong – the internet is an amazing, beautiful tool. It has brought the loftiest aristocrat to the same level as a dishwasher, and this is a good thing. The internet has created a sort of near-instant, egalitarian, global communication; something even Doc Brown couldn’t imagine.

But in many ways it allows us to tune in and drop out of actual conversations with real people. 89% of cell phone owners say they use their cell phone during social gatherings with friends, according to a new PEW Research Center report. This is no surprise to anyone who’s been to a bar or a party in the past four years.

Instead of looking around for a friendly face (or a pretty one), many resort to Tinder-esque swipe apps, or scanning Twitter for Kardashian updates.

What’s even more surprising is that 82% of people in the same survey said this usage “frequently or occasionally” hurts their conversations.

So we know this is an issue… but we still don’t put our phones down. People who have addiction issues would be the first to identify a connection here: you know it’s detrimental, and you do it anyway.

Now, I can hear you scoff, saying: “Yeah, right. My phone is like heroin. Bah.”

Get over it, it’s called a metaphor. For one, you can’t really be a “functional heroin addict” (so I’m told), and cell phone users aren’t going to be fired from their jobs for checking social media. But there are proven links between distraction and lowered productivity:

At work, it can take 23 minutes to get back on task after an interruption. This becomes a problem when the average office worker is interrupted every 11 minutes, according to Gloria Mark, Professor of Informatics at UC Irvine.

There are thousands of studies about the negative effects distractions have on task completion, and they all point to harmful effects on productivity (see the New York Times’ article, or the one in The Wall Street Journal, and this Stanford study).

Now I’m not one of those anti-technology hippies. The advent of the internet and the Age of Information has brought a level of education to the layman which is extraordinary. However, as with any new technology, sometimes we have to weed out the bad ideas.

I believe that we have a strong reason to get rid of smart phones. For social and economic reasons.

Technological revolutions have made life easier for us: but we’re at a point where we get by without actively participating.

Stanford researcher Clifford Nass calls us “suckers for irrelevancy.” Ask yourself: is getting by without thinking something you want? Do you think the Elon Musks of the world spend 1.72* hours a day on social networking sites?
*(The Global average according to GlobalWebIndex).

Aziz Ansari (author of Modern Romance) calls this phenomena “phone worlds,” and it’s safe to say that these virtual realities – an amalgamation of social media, search, and internet games – are getting bigger and bigger.

As phone worlds grow we can see a clear rift between them and the real world.

Just look at your Facebook profile or your Instagram feed: does that world define you? Or perhaps more importantly, do you want it to? 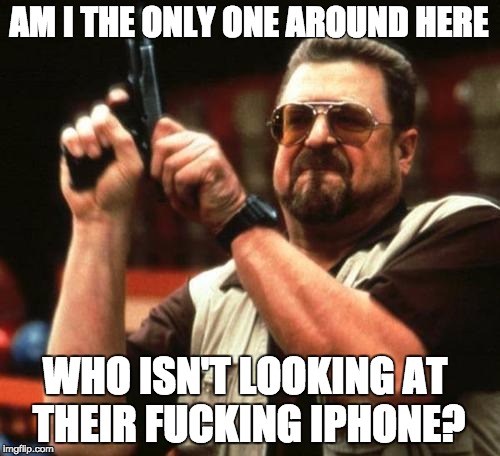 Remember, the internet is still very young, and no technological advancement evolves without minor glitches along the way.

And some scientists are working on creating an internet that integrates into the physical world, instead of disrupting it.

Take Pranav Mistry, Global Vice President of Research for Samsung America. He created SixthSense at MIT, a paradigm-shifting technology that brings the physical world and the web together using cameras and motion-sensing technology (watch his TED talk).

Until this becomes a reality, try living with a flip phone.

You might feel naked initially, but your productivity will increase, you’ll form better relationships with people around you, and you’ll be able to focus better (even without adderall).

So you’ll miss that random high school guy saying “God is Great.” And you don’t see when the girl from college you banged posts a duck-face, captioned “Got silly on wine with my BAE last night.”

Tune out, drop in, and say hi to Adrianna across the bar. She’s waiting for someone to distract her from that damn screen.