Skip to content
Home › Harvard University gets cocky, loses $1B

Harvard University gets cocky, loses $1B

Harvard bet its endowment fund on Brazillian tomato farms... and it didn't exactly pay off. Harvard University gets cocky, loses $1B

Driven largely by alumni donations, the elite private college maintains a fund of approximately $37.1B. For reference, that’s more than 6 times the size of one of Silicon Valley’s biggest venture capital firms, Accel Partners.

Like any other large fund, Harvard has finance managers who are tasked with investing this capital in smart, responsible ways. But recently, this hasn’t worked out too well for the ol’ Ivy…

First, a quick primer on endowments

Simply put, an endowment is a fund created by public and private universities from the donations they receive. Each year, 4-5% of an endowment is withdrawn to fund things like financial aid programs, professorships, and new buildings.

The rest of the fund (which, in Harvard’s case, amounts to billions of dollars) is invested as a way to generate a permanent source of income.

Many universities prefer to play it safe and invest their endowments long-term in index funds, which match or track parts of a market index like the S&P. But Harvard’s financial “geniuses” thought they had a better idea…

In the wake of the Great Recession, Harvard’s endowment fund suffered huge losses, and it set out to diversify its portfolio.

Their grand solution: investing in tomato, sugar, and eucalyptus “farms” in the impoverished (but then growing) northeastern reaches of Brazil. According to Bloomberg, Harvard’s brightest minds thought the farmers’ profits could “outstrip those of conventional stocks and bonds.”

It didn’t work out — and last year, Harvard reported a $1.1B decrease in the value of its natural resources portfolio.

Still the biggest, but not the baddest

One thing Harvard’s risky investment strategies have earned them: the worst average annual return of any Ivy League endowment fund. Over the past 10 years, the school has eked out a 4.4% return — nearly half that of MIT, and less than the composite average of 809 US colleges: 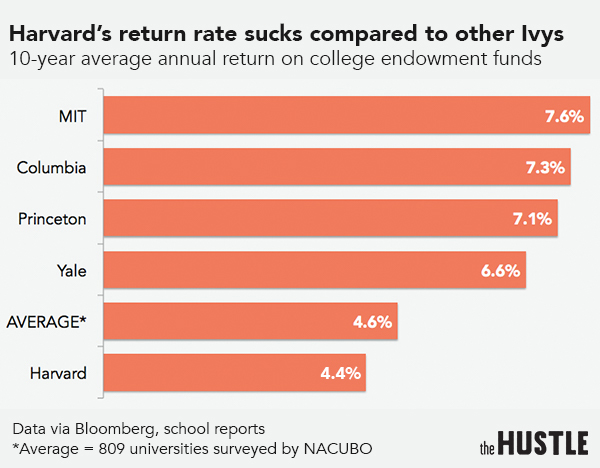 Despite their poor performance, they paid out in excess of $240m to their endowment fund managers between 2010 and 2014 — some of whom earned as much as $13m per year.