Skip to content
Home › How Tall Is Tim Ferriss?

How Tall Is Tim Ferriss?

The internet doesn't seem to know (or care) but I had to find out. Tim Ferriss. You know him. That guy who interviews people, records podcasts, tests a lot of stuff on TV, and only does things for 4 hours.

The other day I saw a picture of him with motivational speaker Tony Robbins that stopped me dead in my digital tracks and totally changed my perspective.

Here’s the picture, take a look. What’s the first thing you notice? Correct. Tim looks like a small child standing next to a monster of a man.

It’s no secret that Tony Robbins is a little above average in the height department. A pituitary tumor made him grow 10 inches in high school to a towering 6’7”. But still, a lot of my friends are 6’5” and most people still look “normal” next to them.

Something was up so I googled the obvious question: How tall is Tim Ferriss? Someone somewhere must’ve commented on his height. I mean, it’s the internet, he’s a celebrity, and I’d imagine at least a few other people have questioned his vertical integration strategy.

But there was nothing! Nada, zilch, absolutely zero information about whether or not Tim is at least “this” tall to ride the ride. Anyone else find that crazy? Something was fishy and I needed answers.

At first I wanted to start with a ballpark figure. Obviously, 6’7” is a tough hill to climb. Maybe there were pictures of Tim standing next to celebrities with known heights a little closer to his stature.

After an extensive Google image search, here are the main pieces of evidence for consideration (in no particular order): 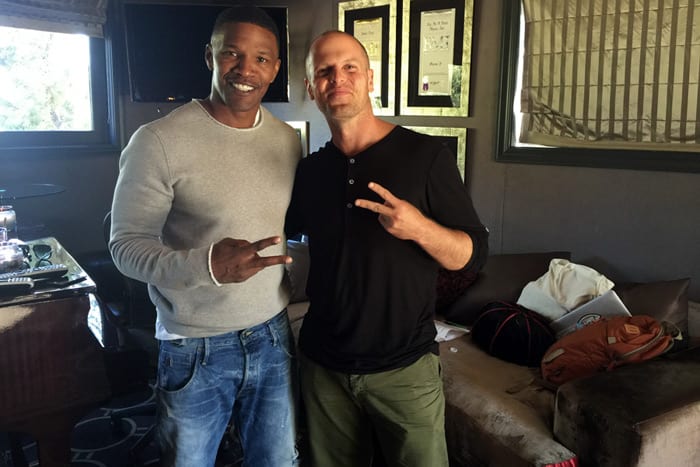 Starting from the top, Tim looks to be at least 5 inches shorter than the 5’11” Seth Rogen (not including his hair) which puts him squarely at 5’6”. Glenn Beck’s a tall guy but the picture of the two of them air boxing in front of Alcatraz doesn’t show the legs so it’s hard to estimate the amount of squat involved. The 5’6” estimation is safe.

Then we get to Arnie and his massive belt buckle and tucked-in undershirt. Unless he had a massive shrink spurt since he last got a physical, it doesn’t look like Arnold is 8 inches taller than Tim. In fact, I’d say it looks a whole lot closer to 3 inches, putting Ferriss all the way up to 5’11” and only 8 inches below Tony Robbins. No way that adds up… I reckon there’s some kind of soapbox involved.

Alessandra Ambrosio is a Victoria’s Secret model so it’s safe to assume she’s wearing some pretty high heels. Clearly Tim is shorter than she is in this photo but even knocking her down 3 inches takes Tim back down to around 5’7″. Think they were making an omelette? I’m guessing an omelette. Nope, found the video and it’s TOTALLY worth watching.

And finally we find ourselves at Jamie Foxx and Neville. Both claim to be 5’9” but we get some conflicting results. Next to Foxx, Tim looks like he’s down at least 2-3 inches – well within the 5’6” realm of possibility. But when he stands next to Neville, it looks like they’re roughly the same height, with Ferriss maybe a tad shorter based on the perspective.

After careful review of the photographic evidence, the waters have somehow become murkier…

Does it have to do with his shoes? Can this all be an optical illusion explained simply by complex camera-to-subject geometry? We need a credible source who’s met the man, the myth, the immeasurable question mark in the flesh. Thankfully, I knew just the guy.

Neville Medhora, the guy cozied up next to Tim in the last photo, has been a friend of the company for a while. He spoke at Hustle Con a couple years back and we exchange posts here and there. I decided to shoot him an email and get his take.

Subject: How tall are you?

I’m trying to figure out how tall Tim Ferriss is and came across this picture of the two of you.

Which leads me back to my subject line: how tall are you? Sorry if it’s a bit personal but so far you’re my best lead.

He responded an hour later.

Shit. 5’10”?? That height makes sense for Glenn Beck, Arnie, and Neville’s pictures but you’re telling me he’s an inch taller than Jamie Foxx, the same height as Alessandra, and just an inch shorter than Rogen? Nope. No way. Not to mention that would make him 9” shorter than the beast who started this whole thing off, Tony Robbins.

Out of curiosity, I googled “how long is Tony Robbins’ face” on the slim chance he smelled a ruler and got caught on camera. No dice. But I did learn that the average human head is 9.4” tall. 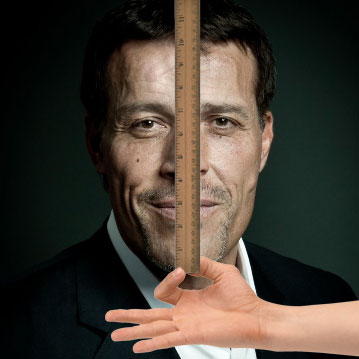 With all my fuzzy math, unfounded assumptions, and general hearsay I can confidently say I think Tim Ferriss is 5’9”. A few of the pictures suggest otherwise but, at this point, I have to chalk up the variation to shoes, posture, and hidden step stools.

If anyone out there reading has any information regarding Tim Ferriss’ height or the length of Tony Robbins’ face, please leave a comment or shoot us a message on Facebook.

Update 3/23, 10:55am from Dylan in the comments: “Googled “how tall tim ferris”. Second result is an Inc. article from a couple of years ago on height and success. Author is 5’9″ and says explicitly that Ferris is “a smidge shorter than me”.